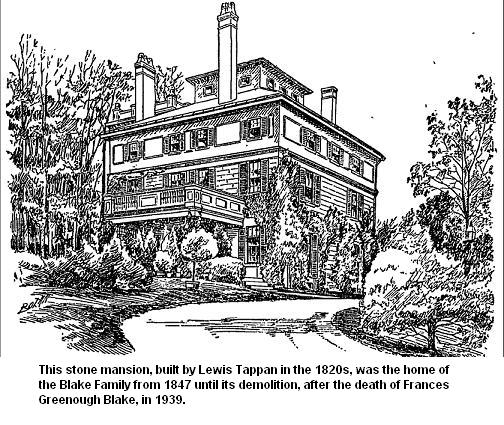 The property that became the Blake estate was purchased from the Croft family by Lewis Tappan in the 1820s. Tappan (1788-1873), who had married Dr. William Aspinwall's granddaughter Susan in 1813, built a stone mansion just down the hill from the doctor's house. (Dr. Aspinwall died in 1823; his family continued to own most of Aspinwall Hill for many years after.)

The Tappans moved to New York in 1828, and the house and surrounding land passed through two owners before it was acquired by George Baty Blake in 1847. 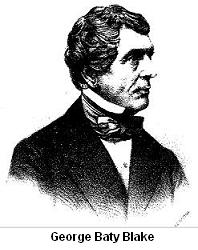 George Baty Blake (1808-1875) was born in Brattleboro, Vermont, the youngest of nine children. His mother died shortly after he was born, and his father died when George was 10. He came to Boston in 1821 to live with his sister's family and to work in the Boston-dry goods business of Edward Dickerman.

[The best description of the life of George Baty Blake, and the source of most of the information about him on this page, is a five-page profile in Brattleboro, Windham County, Vermont : Early History, with Biographical Sketches of Some of Its Citizens written by Henry Burnham and published in 1880 by D. Leonard.]

After several years with Dickerman, Blake joined the business of his brother-in-law Edward Clarke, a dry goods importer, in 1828. He was soon made a partner in the firm and made frequent trips to England and continental Europe to purchase goods. He later left Clarke and, with partners, ran his own dry goods importing business until 1846 when ill health forced him to retire.

Blake and his wife Ann Hull Blake (1815-1873) acquired the former Tappan house and estate in Brookline in 1847. By 1850, he was active in business again, this time as a banker. His firm, after several name changes, was eventually called Blake Brothers & Co. (The Blakes' three oldest sons, Stanton, George Baty, and Arthur Welland, joined the firm as partners just before the Civil War.)

An early sympathizer with the abolitionists, Blake was instrumental in securing financial help for Massachusetts for the Commonwealth's efforts to support the Union cause in the Civil War. George Baty Blake died at his Brookline home on August 6, 1875, two days after suffering a severe attack of paralysis at his office in Boston. The estate then became the home of Arthur Welland Blake and his family.

Arthur Welland Blake (1840-1893) grew up on the Brookline estate, attended Boston schools, and entered Harvard in 1857. He left Harvard during his freshman year to enter business, according to his obituary in The New-England Historical and Genealogical Register (1896), and joined his father's firm in 1861. He lived in New York, where Blake Brothers had an office, for 10 years before returning to Massachusetts after his father's death.

Frances Greenough came from an artistic family. Her father Henry (1807-1883) studied painting in Florence in his 20's and returned with his wife and young daughter to live in southern Europe for five years (1845-1850). They spent time with Margaret Fuller and Robert and Elizabeth Barrett Browning, among others, according to the Dictionary of American Biography (the source for most of the information here about the Greenoughs).

Henry's brothers Horatio and Richard were both celebrated sculptors. Among their many works, Richard Saltonstall Greenough was responsible for the statue of Benjamin Franklin in front of Boston's Old City Hall and Horatio Greenough for one of George Washington created for the rotunda of the U.S. Capitol. (It's now in the Smithsonian.)

Alice James (sister of William and Henry) knew the Greenough family and left a brief pre-marriage glimpse of Frances, or Fanny, in a letter (1875?) in which she refers to the three Greenough sisters:

Fanny Greenough is the most attractive of all the tribe to me [wrote James], she is very sweet indeed when she does not laugh too much, then she just suggests weakness & silliness.

Arthur Welland Blake died at his home in Brookline in 1893. He was considered one of the wealthiest men in town. He had been an invalid for two or three years, according to the Genealogical Register, and was no longer active in business. He had begun making plans for the development of part of the estate in the 1880s, but they were unrealized at the time of his death.

Frances Greenough Blake outlived her husband by nearly half a century. She remained an active member of Brookline society in the years after her husband's death (as did her daughters until they moved away), appearing frequently in the society pages of the Boston and Brookline papers. She was a supporter of numerous charitable causes, and was one of the founders in 1922 of the Women's National Democratic Club.

Frances Blake sold most of the estate to the P.H. Park Trust in 1916, retaining the house and several other buildings and six acres of land. After her death at the age of 96 in 1939, the house was torn down, and additional streets and houses were added the property she had retained.