A short stretch of today's Blake Road, the section between Tappan Street and Sumner Road (outside the bounds of Blake Park and off the plan below), became a Brookline street in 1892. The original Blake Park development in 1916 extended this street from Tappan Street toward Gardner Road. The section from Tappan to where Blake and Somerset intersect today was called Blake Road West. The section from there to Gardner Road was called Gardner Place. There was also a Blake Road East, which today is Weybridge Road and the part of Somerset Road between Weybridge and Welland. (See the 1921 plan below.) 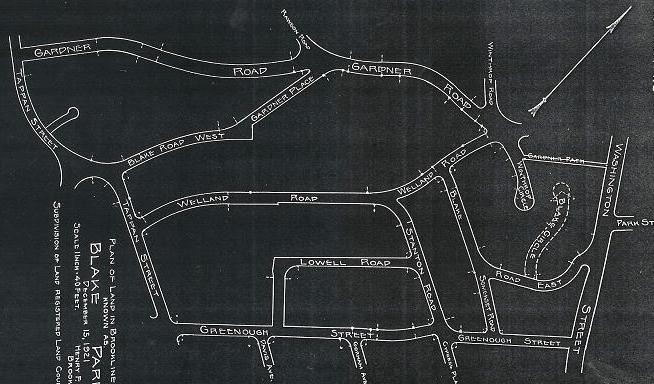 It may be that the intention was to eventually link the two parts of Blake Road across the land retained by the Blake family in 1916 (as did eventually happen, although with changes to the names of the streets).

Name Origin: Blake Road is named, no doubt, after the Blake family.