The Story of Blake Park

In 1880, Boston banker Arthur Welland Blake engaged landscape architect Frederick Law Olmsted to draw plans for the subdivision into roads and lots of the Blake family estate in Brookline, Massachusetts. Olmsted and his firm drew numerous plans for the Blakes over the next 15 years, but they were never executed. The estate remained something of an anomaly: a large tract of open land, renowned for its landscaping, in the heart of a community rapidly developing as a "streetcar suburb" just minutes from downtown Boston.

It wasn't until 1916 that land was sold, roads were laid out -- somewhat differently than Olmsted had envisioned them -- and the development of "Blake Park" was announced with some fanfare. The death of one developer (right after the project was announced) and a financial scandal involving another delayed development for another decade. Finally, in 1925, with both Blake and Olmsted long dead, a new largely middle-class neighborhood began to emerge, populated by the families of bankers and brokers, doctors and lawyers, salesman, college professors, contractors, and local merchants. 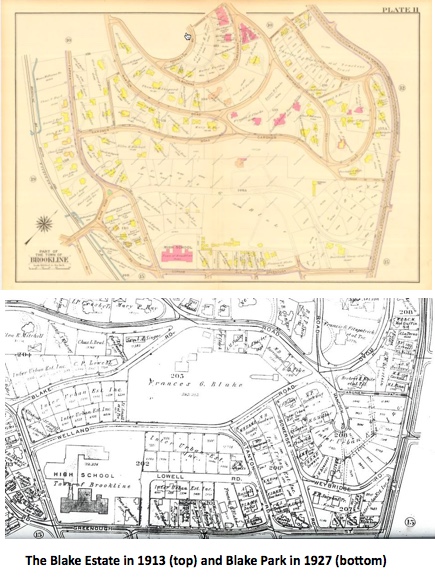 The houses built in Blake Park were relatively modest homes. One, designed by Boston architect Royal Barry Wills won a national small-house architectural competition in 1932. (It was one of 25 Blake Park houses designed by Wills.) Other architects contributed designs as well, but there were also houses based on the plans of builders and individual homeowners or taken from home design catalogs.

A house built by the town doctor in 1822 and added to the Blake property in the 1880s was redesigned for the new development, and several 19th century stables and carriage houses owned by the Blakes were eventually incorporated as well. The Blake house itself, built in the 1820s by abolitionist Lewis Tappan, remained the home of Arthur Blake's widow, Frances Greenough Blake, until her death at the age of 96 in 1939. It was then torn down, and additional streets and houses were added on the six acres that Frances Blake had retained when the rest of the estate was sold in 1916.

This site traces the history of Blake Park and its transformation (in fits and starts) from a private estate into a middle-class neighborhood. One major section, The Houses & People of Blake Park, offers a close-up look at the 115 or so houses of the neighborhood and the people who made this their home between 1925 and the end of World War II.