Greenough Street, which marks the southern edge of Blake Park at the bottom of Aspinwall Hill, was laid out in three stages. The first section, from Tappan Street to Davis Avenue -- it runs in front of Brookline High School today -- was laid out as Gorham Avenue in 1871. Three years later, Gorham was extended a little further toward Washington Street then turned sharply and extended to Cypress Street, making Gorham an L-shaped street, as shown in the 1874 atlas map below. 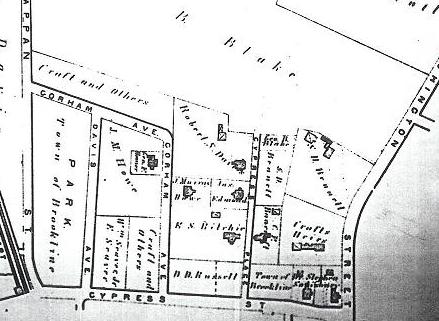 Name Origin: Greenough is presumably named for the family of Frances Greenough Blake.

Note: The odd-numbered houses on Greenough Street between #55 and #87 are not included here. These buildings (or their predecessors) were not part of the Blake Park development or of the Blake estate in 1916.