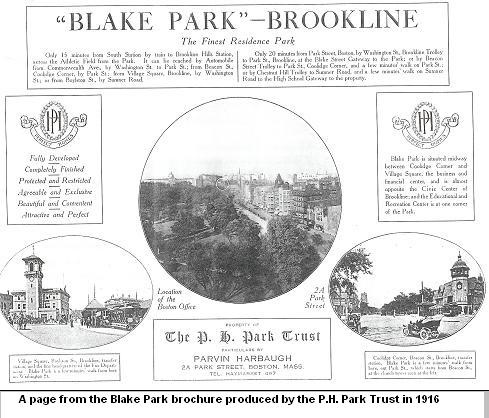 The Boston Evening Transcript called it “a unique undertaking in the history of Boston real estate.” The Brookline Chronicle called it an “illustration of community progress” and an opportunity for “a communal knitting-together of an interesting sort.” The developer, in a 16-page brochure with a Wedgwood-designed logo on the front, promised “a community of perfect homes” and “the finest residence park in the United States.”

In October 1916, more than 35 years after Frederick Law Olmsted first drew plans to subdivide the Blake Estate, it appeared that a residential development on this property near the heart of Brookline was, at last, about to become a reality.

In September, the Chronicle had announced "one of the largest land sales in Brookline recorded in recent years": more than one million square feet of the Blake Estate valued at around $500,000. This property, said the Chronicle in another article, was "the last of the big Brookline estates near the heart of town to remain intact."

The buyer was the P.H. Park Trust led by Parvin Harbaugh, a real estate developer whose projects had included Hollis Park Gardens in Queens, New York and Coolidge Park in Watertown, Massachusetts. The Blake House and six acres around it were to remain in the hands of Frances Blake. (Arthur Blake had died in 1893.)

Within a month or so, detailed plans for the development of "Blake Park" had been prepared and presented in an elaborate brochure. ( Several new streets were to be laid out, including Welland Road, cutting across the center of the development, as well as Blake Road East, Blake Road West, Winthrop Circle, Gardner Place, and Lowell Road. (See the pages on the individual streets for more on these roads as they ultimately evolved, many under different names.) 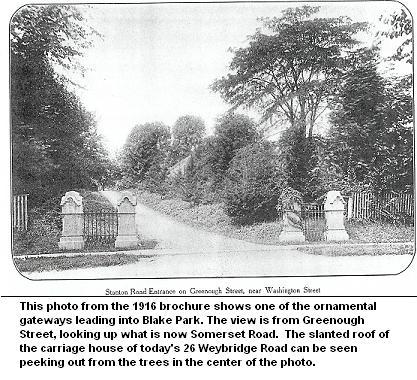 There were to be seven entrances to the Park, each marked by an ornamental gateway. Restrictions on what could be built were to be put in place: there were to be single family homes only and no commercial businesses of any kind.

Most importantly, the exquisite landscaping for which the Blake Estate had become known was to be preserved as much as possible.

It is as beautiful as the Public garden, [said the brochure] with a greater diversity of surface attractions. This is not an extravagant statement, but is made advisedly, for upon Blake Park has been lavished for many years all the money, time and work required to produce what is finest in the art of landscape gardening, directed by good taste, an appreciative effort, and the constant care of a large force of experienced gardeners.

This was to be a key selling point for the property, as is apparent from this excerpt from the same page of the brochure:

Blake Park is ready to place your home amid surrounds of trees, shrubbery, and lawn, all in perfect condition; and of such perfection of growth that you could not match in twenty-five years of careful training, and the outlay of a large amount of money; in fact many of the building sites could not be reproduced during a lifetime; but here they are all ready for your immediate enjoyment.

The Trust's plans made a good impression on the local newspaper. The lead article in the October 7th edition of the Chronicle announced the development, with the headline "The Creation of Blake Park: The Community to Succeed to the Old Blake Estate: A Development Project Which Leaves Familiar Beauties Intact."

With its acres of lawn, its picturesque road ways, and its varied wealth of noble trees, the George Baty Blake estate, the last of the big Brookline estates near the heart of town to remain intact, has succumbed to the inevitable progress of urban development. These broad private lands which stretch from Washington Street to Tappan, and from Greenough Street to Gardner Road, have been dissected by the architects compass into a hundred house lots of various sizes. The Blake estate, except for a few acres still maintained by the present owner, has become Blake Park.

The passing of a landmark is always the cause of a justified sentimental regret, but the contemplated development of the Blake estate is attended with none of the aesthetic and community misfortune so often connoted by the "development schemes." The Blake estate has passed not into a decadence to be deplored but into what might more aptly be called a regeneration. No effrontery of garish apartment buildings, no flimsy stores, nor top-heavy double houses will destroy the natural beauties which the estate possesses so plentifully. Instead there will arise ninety or a hundred single houses of a cost not too high for the average man with moderate income to build nor low enough to permit the erection of houses which have justly dreaded earmarks of the "cheap."

Five weeks after this article appeared, a brief front page article in the Chronicle announced that Parvin Harbaugh, head of the P.H. Park Trust and the man who conceived and organized the Blake Park development, had died. The project, said the paper, would go on despite the loss of this "real estate man of vision as well as practical experience."

"Mr. Harbaugh's intentions," reported the Chronicle, "were so well known to his asociates that no interruption of the work is looked for." Leadership was to pass to Harbaugh's partner "Mr. Wasson" [actually Leonard C. Wason, a Brookline native, MIT graduate, and contractor who built the Harvard Stadium (1903) and Christian Science Publishing House (1929) in Boston], and Harbaugh's son-in-law "Mr. [Lionel C.] Hartford, a civil engineer, who has taken a prominent part in the laying-out of Blake Park."

In fact, the laying out of the streets was all that would be accomplished in Blake Park under the stewardship of the P.H. Park Trust. (It is unclear how much of this had been completed by the time of Harbaugh's death.) Resumption of the project would have to wait until another developer took over in 1919. That work, too, would be interrupted—by less natural causes, as shall be seen in the next section—and the realization of Parvin Harbaugh's vision of Blake Park would not come to pass until 1925. 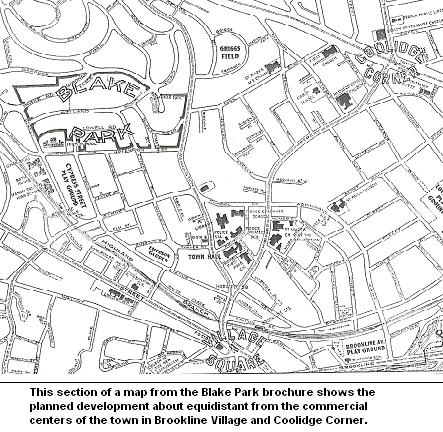