There had been a whiff of trouble back in the fall of 1922. But no one, it seems, was prepared for the full-blown stench of scandal that erupted in the middle of February 1923.

It was front page news in all of the Boston newspapers for several days running: S. Leland Montague, the head of the Inter-City Trust and the developer (since 1920) of Blake Park and other properties in Massachusetts and New Hampshire, was under arrest. The charge: swindling hundreds of investors, most of them women, out of hundreds of thousands of dollars in a development scheme that was more scheme than development.

How did this all come about? 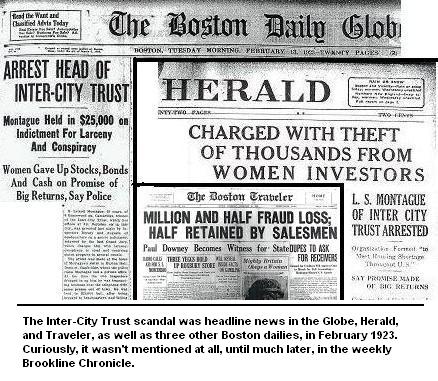 The Blake Park project remained dormant for four years after the death of Parvin Harbaugh in 1916. In 1920, the property was acquired from the trustees of Harbaugh's P.H. Trust by the Inter-City Trust, led by S. Leland Montague. Montague was born in Cambridge in 1870. He was named for Samuel Leland Montague, a cousin of his father, who was mayor of Cambridge in the 1870s. His family moved to New York when he was 10, and he later returned to Boston and taught "theoretical and practical realty" at Northeastern College and Boston University.

Inter-City engaged the services of the architect Clarence Thayer McFarland who designed three new houses for the developer on Gardner Road (#s 80, 112, and 150) and redesigned the 1822 Wild House (now 26 Weybridge Road). McFarland designed several other houses in Brookline, as well as churches and armories in other parts of the state and the town hall in Townsend. A Christian Scientist, McFarland also designed the buildings of the Christian Science Benevolent Association (now the Chestnut Hill Benevolent Association) on Single Tree Hill off Route 9. (He collapsed and died on the site of the latter project in 1923.)

The four houses built or redesigned by Inter-City before its collapse were large homes, much larger and more expensive than later houses built in Blake Park. (Deeds from Inter-City for undeveloped parcels required that no house costing less than $20,000 could be built.) The Trust marketed the properties aggressively, with full-page ads in the Brookline and Boston papers. In addition to unique designs, the ads promoted the exclusivity of the development with "undesirables" to be kept out by mutual agreement among the owners. 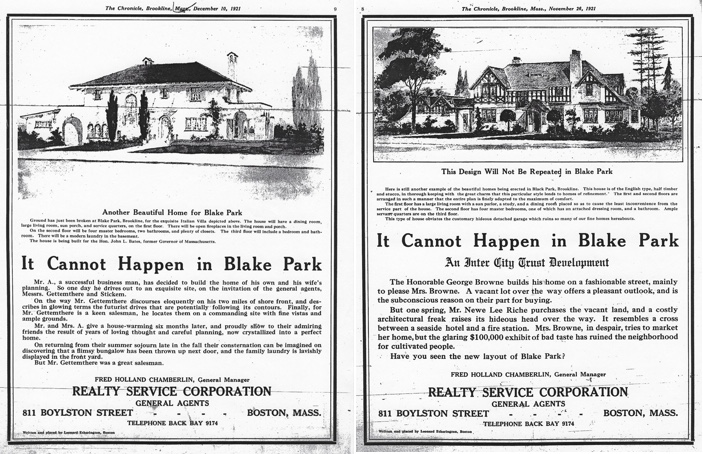 An ad for the former Wild house, for example, included this scenario:

Mr. A builds a $35,000 home, and for five years all is serene . But one spring morning he observes from his front windows the foundation being laid of an apartment house over the way. The same week he discovers that a prosperous “newly-rich” has just purchased the property. Also, before the end of the month, he finds that a two-family house of the flimsiest construction is being thrown together next door. Mr. A. goes to his lawyer to find out what remedy can be applied to the situation. The lawyer answers: “Were there any restrictions on the property when you purchased five years ago, or any resale clauses in the contract?” There being none, nothing can be done.

In Blake Park neither your neighbor nor his heirs can resell to undesirables. In other words, you are safe to build a $40,000 house in this exquisite tract, and be sure of absolute protection for nearly a third of a century, and probably for many years thereafter through mutual agreement among the owners.

It wasn't only flimsy construction that Inter-City promised to keep out. An ad for 80 Gardner Road offered a guarantee against the kind of  expensive "bad taste" that "cultivated" people would not want to see next door.

The Honorable George Browne builds his home on a fashionable street, mainly to please Mrs. Browne. A vacant lot over the way offers a pleasant outlook, and is the subconscious reason on their part for buying.

But one spring, Mr. Newe Lee Riche purchases the vacant land, and a costly architectural freak raises its hideous head over the way. It resembles a cross between a seaside hotel and a fire station. Mrs. Browne, in despair, tries to market her home, but the glaring $100,000 exhibit of bad taste has ruined the neighborhood for cultivated people.

Other ads indicated that buyers in Blake Park would have neighbors "who have passed every social and financial test" with "five social references" required. And while no restrictions against particular groups were put in place, deeds of sale stated that purchasers could not subsequently sell or lease the properties "to any person or persons not approved in writing by the grantors or their successors." (i.e. Inter-City Trust).

Two of the McFarland-designed houses sold during the winter of 1921-22: 112 Gardner to Albert Finlay, president of a large Boston printing firm in December; and 80 Gardner to George Pike, head of a Chelsea-based manufacturer of polish and adhesives for the shoe industry. The third house was to be occupied by former Massachusetts governor John L. Bates, but remained uncompleted and unsold by the time Inter-City collapsed.

The first sign of problems with the Blake Park development may have been the removal of the property from the market in September 1921 "for the purpose of making certain improvements." These improvements, according to a November advertisement, included sewers, drains, water, gas, electricity, and road work and would be completed by the following June. The public, noted the ad, "has been thoroughly unsold because of lack of visible development on the property."

Two months later, another ad painted a different picture. Inter-City and its subsidiary Realty Service Corporation, said the ad, "have on file so many applications for land in Blake Park that we have less than 30 plots left, while plans are being drawn for over a dozen residences to date." Another ad that month warned potential buyers that "The only injury done by your hesitation and doubt is to yourself."

But if that hard sell approach to prospective buyers seemed overly optimistic it was nothing compared to what investors in the Inter-City Trust were being told.

Promises of 800-1000% return on investment, plus dividends, were widely reported by men and women who put their money behind Inter-City's developments in Brookline as well as Andover and Lowell in Massachusetts and Manchester in New Hampshire.

"So convincing, so earnest, so persuasive was Mr. Montague that almost before I knew it I had surrendered to him my savings for his enterprise,” one woman told the Boston Daily Advertiser. “He lured me against my better judgment, against my good sense and my business instinct. I felt an investment promising 1000 p.c. was a fraud. I told him so. But in spite of my instinct I succumbed.”

Dividend checks kept investors happy and confident in the earning power of the Trust and in the possibility of greater returns from property sales in the various developments. But there were no actual earnings and little actual development. Dividends were being paid out of the money brought in by new investors in a Ponzi scheme. (Ponzi himself had been arrested in Boston and sent to prison late in 1920.)

Other salesmen were hired from time to time in Lowell, Lawrence, Lynn, and Cambridge. They were offered chances to become branch city managers if they made good and when they had exhausted their friends in selling stock they were replaced by other fresh batches of men.

Salesmen were told to focus on women investors.

We were instructed to keep away from big business men and call on middle-aged women, housewives, widows, and stenographers. ‘Business men’, we were told will ask if the stock is listed. When you tell them it is not, they will say they are not interested. Women are more gullible and more easily impressed. Go, too, to janitors and street cleaners and laborers. They do not know the difference between listed and unlisted stock.

It apparently wasn't enough. Dividends dried up and complaints from investors grew. In July 1922, Montague fired all of his salesmen and replaced them with a corps of high-powered pitchmen from a New York firm known as the Crager System. Crager's motto was "We Sell Anything," and they speciaiized in selling underperformng securities through high-pressure tactics and exaggerated, if not outright false, representations of a company's prospects.

(Crager System executives would be indicted later that year in a scheme to sell stock in a glass coffin company, in part by telling investors that new laws in the works would soon make glass coffins mandatory.)

Crager sent 51 salesmen—the "Flying 51"—from New York to New England to work on  Inter-City sales. They were methodical, using church publications, lists of charitable donors, and rosters of women's societies to identify prospects. They also targeted existing investors, bringing dividend checks as bait and convincing them that even better returns were all but guaranteed.

"Word pictures of Rolls-Royces, Winters at Palm Beach, falls at Catalina, tours of Europe, spacious estates on the land of the company," were used to entice the prospects, reported the Boston American.

Wealthy women investors were, in particular, taken in, and many of them traded other stocks and bonds for what turned out to be largely worthless Inter-City certificates. Victims also included school teachers, clergymen, farmers, mill hands, office girls, laborers, and police officers. Twenty-five transit system motormen and conductors in North Cambridge were convinced to invest from $100 to $1,000 each. 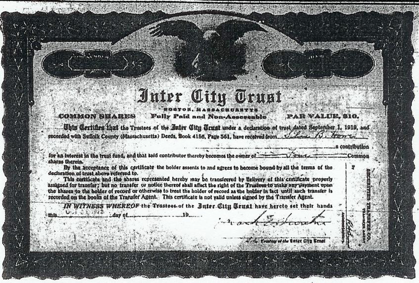 Montague later placed the blame solely on the Crager System, but circulars produced by his office assured existing and potential investors of the soundness of what the Crager salesmen were offering. One former Inter-City salesman insisted the problems began much earlier.

It is all right to talk about the New York system gang putting things over, but a lot of funny business was being done by Montague’s salesmen during 1920 and 1921.

The End of Inter-City

New complaints started pouring in, and in late November 1922 the Massachusetts Public Utilities Commission prohibited further sales of Inter-City stock. Investigations were underway from the office of the Massachusetts Attorney General and from officials in five counties in the Commonwealth, as well as in New York. Federal officials began looking into possible charges related to the use of the mails to commit fraud.

Montague stepped down as trustee of Inter-City and the Trust was placed in receivership, but it was too late. In mid-February, Montague and Inter-City's executive secretary George Stanford were arrested by Boston police. Warrants were later issued for many of the Crager System salesmen, but they had given false addresses and were apparently never apprehended.

A lawsuit brought against Inter-City and its receivers alleged that of $1 milion dollars raised by the Trust only about $250,000 was spent on development of the various properties. (The lawsuit was brought by, among others, Leonard Etherington, who had written and placed the advertisements for Inter-City, and Fred Holland Chamberlin of the Inter-City subsidiary Realty Service Corporation. Both men apparently were owed money for their services.) 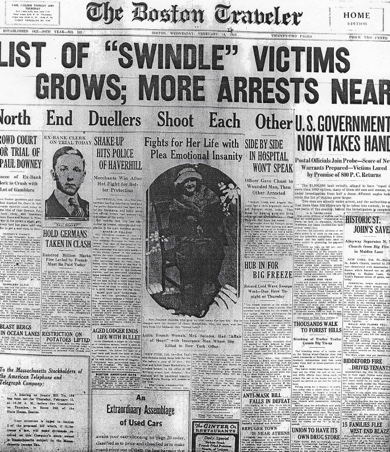 The Boston Post reported that nearly half of the money taken from investors—they put it at $1.5 million—was used in paying "commissions to salesmen, brokers and office managers, princely salaries for the heads of the scheme and lavish 'pep and personality parties' for officers and sales force at high priced hotels.”

Montague and Stanford went on trial in April 1923, but both were found not guilty. No one associated with Inter-City was ever convicted, but the Trust was finished and the Blake Park development, with just two houses sold and two more incomplete, was once again brought to a halt.

It would be two more years before it started up again.