Paine owned a stationary store at the corner of Washington Street and Davis Avenue from 1895 until his death in 1956. Louise Andrews Kent in her 1954 children's book The Brookline Trunk described Paine's in 1925 as "the nicest store in the village."

Whenever we have a present to buy, we always go to Paine's. Besides toys of every kind they have all sorts of stationery, books, and magazines. Everyone in the store is very kind and they let you look a long time before you choose what you want...Paine's is also the newspaper store and every morning and evening it is full of noise and excitement at the side door where the trucks bring the papers and the newsboys collect the ones they are going to deliver. 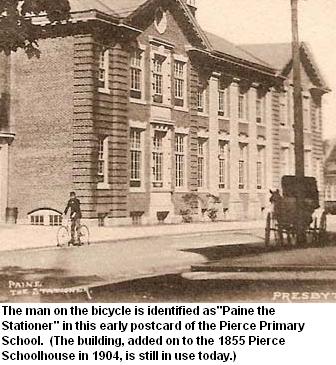 Paine was active in Brookine business and community affairs. He served on the Brookline Water Commission for 20 years and was a vice president of the Brookline Coooperative Bank.

The Paines were followed in this house by the family of Edward and Sade Goldstein, who moved here from 16 Gardner Road. Edward was a jeweler who, according to his obituary in the Boston Globe (May 9, 1991) was the "originator of leased jewelry departments in department stores in the late 1930s." He was also at one time a director of the National Conference of Christians and Jews. The Goldsteins were listed at this address in the Brookline street list from 1941 until the late 1960s.

The architect of 17 Hancock Road, John Radford Abbot, began his career in 1919 with the firm of Strickand , Blodgett and Law in Boston and opened his own architectural practice in Cambridge in 1929. He designed buildings for many private schools, including Abbot, Andover and Milton Academies, and the Noble & Greenough School. He also designed 70 Welland Road in Blake Park.