150 Gardner Road was one of three Blake Park houses, all on Gardner Road, developed by the Inter-City Trust and designed by the Trust's architect Clarence Thayer McFarland. A sketch of McFarland's design, together with a description of the house, was shown in an ad for Blake Park in the Brookline Chronicle in December 1921. (See below). Ground had been broken for the house by then, according to the ad, although it seems likely actual construction did not begin for some time after. (The building permit was issued in September 1922.)

The house was built for John L. Bates, Governor of Massachusetts from 1903 to 1904 and, before that, Lieutenant Governor and Speaker of the House. Bates, however, never lived in the Gardner Road house. Construction was apparently still incomplete when the Inter-City scandal put a halt to development, and didn't resume until 1925. 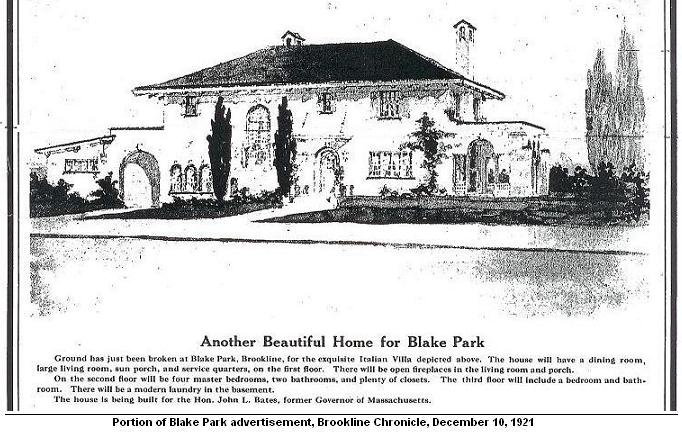 150 Gardner became home, instead, to the family of Samuel A. and Mary L. Singer. Samuel, born in Poland, was a real estate investor prominent in that field in Boston for 35 years. He was one of the founders of Congregation Kehillath Israel in Brookline, and also served as a vice president of the Grove Hall Savings Bank. The Singers lived here until 1949 or 1950. He died in 1961.

The Singers' second son Bernard later became prominent in real estate as well. He served as chairman of the Massachusetts Housing Finance Agency in the 1980s. Bernard died in 1996.