The first house built as part of the Blake Park development (not counting a handful of older, pre-existing structures), 112 Gardner Road was one of three Blake Park houses built by the Inter-City Trust before its collapse in scandal. Like the other Inter-City houses (80 and 150 Gardner Road), it was designed was by Clarence Thayer McFarland.

The house was shown in a Blake Park ad that appeared in the Brookline Chronicle in November 1921. (See below.) 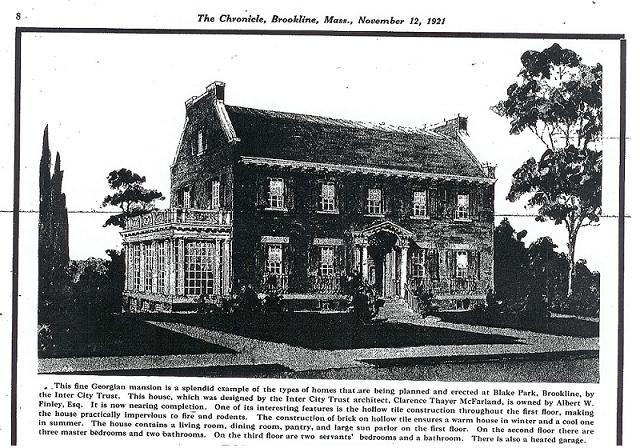 It was the home of Albert W. Finlay (misspelled as Finley in the ad), president of the George H. Ellis Company, a large printing firm in Boston. Finlay was a leader for several years of a national organization of printing companies and was active, in that role, in opposing unionization and the introduction of the eight-hour day in the industry. He was also a noted yachtsman, winning races into his 80s. (The Finlay Cup, awarded annually to Boston-area sailors for a number of years, was named for him.)

Finlay lived at 112 Gardner with one of his daughters, Minnie. They were listed in the Street List from 1922 to 1928 and again from 1936 to 1940. (Finlay had been involved in a nasty divorce case in 1913 in which he accused his wife, an actress, of infidelity with a Boston actor. Another daughter, also an actress, testified for her father in the case.)

From 1929 to 1935, according to the Street List, 112 Gardner was the home of Patrick F. and Mary C. McDonald who apparently rented the house from Finlay. Patrick was president of a steel company. Later, after leaving Gardner Road, he served for several years on the board of directors of the Boston Public Library and was, at one time, President of the Boston Public Library Corporation.

The 1941 Street List had Joseph and Mary Keller and their family, formerly on Lawton Street, living in the house. Joseph, who was born in Russia, was a merchant, although it is not clear of what kind. The Kellers, who were listed until 1944, were followed by Abraham and Helen Lampke, formerly of Lawlor Street. They were listed here until 1972. Abraham was a buyer. He died in Brookline in 2003. No other details are available.