80 Gardner Road was one of three houses built in Blake Park by the Inter-City Trust before its collapse in scandal. At $30,000, it was the most expensive house built in the development. The design was by Clarence Thayer McFarland, who also designed 112 and 150 Gardner Road for the Trust and was in line to design other houses as well. 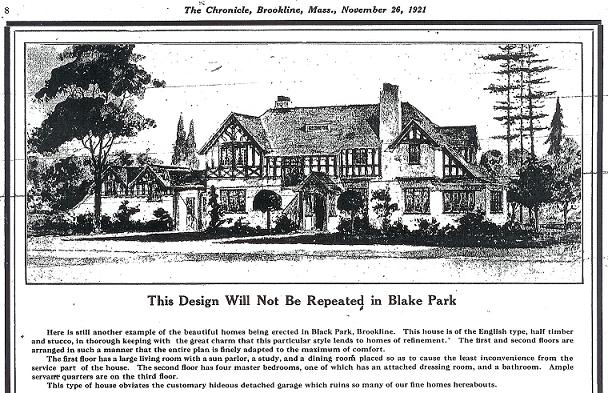 The house was built for George and Mabel Pike. Their daughter, Elsie Pike Whitney, lived there with them beginning in 1929 or 1930. George Pike was president of the Boston Blacking Company, a manufacturer of polish and adhesives for the shoe industry. Founded in Chelsea in 1889, Boston Blacking was sold to the United Shoe Company in 1929.

The Pikes were listed at this address in the Street List through 1934. They were followed by Joseph and Clara Goldman, owners of this house for more than 50 years. (They were listed in the Street List from 1935 to 1987.) A physician, born in Russia, Joseph Goldman was assistant chief of the allergy clinic at Beth Israel Hospital. He was a professor at the Boston University School of Medicine and an instructor at Tufts University. He died in 1984.

For several years beginning around 1937, the Goldmans apparently rented a separate apartment in the house. Listed as 80A Gardner Road, its residents changed just about every year.