This house, like all of the houses on Lowell Road with the exception of the pre-development 8-10 and 12-14 Lowell, was built by Maurice Dunlavy and designed by Royal Barry Wills. 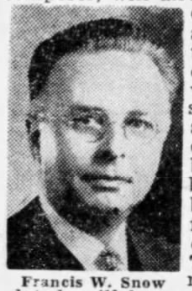 The first residents of 17 Lowell Road, listed in the Street List from 1929 to 1943, were Virginia and Francis Snow and their daughters Virginia and Frances. The Snows were a musical family. Francis Snow (1890-1961) was the longtime organist, music director, and choir master at Boston's Trinity Church. His wife Virginia (1886-1972) taught cello at the New England Conservatory, and both daughters played the flute. (The younger daughter, Frances — later Frances Drinker (1921-1994) — also taught at the Conservatory.)

After leaving Lowell Road, the Snows lived for a time around the corner at 87 Greenough Street.

Following the Snows at this address for a short time were Walter E. Cohen, his son Laurence and daughter Adele Rabinowitz (born c1914) and Adele's husband Sidney Rabinowitz. Walter Cohen was born in Russia c1883 and came to the U.S. in 1892. He owned a millinery shop in 1920, but was listed as a realtor when he first appeared at this address in the Street List. (He was shown as retired the next year). Laurence Cohen (born 1920) was in the Army at the time the family moved to Lowell Road. Sidney Rabinowitz (born c1913) was a wholesaler.