Builder Maurice Dunlavy and architect Royal Barry Wills had already worked together on more than a dozen Blake Park houses by the time they began construction of this award-winning house for Dunlavy and his wife Mary in the fall of 1930.

The house was about halfway up Gardner Path, the stairway leading up Aspinwall Hill from Washington Street to Hancock Road. It carried the address 12 Gardner Path until 1933 or 1934. By that time a new street, Weybridge Lane (with three other Dunlavy/Wills houses), had been extended from Gardner Path to Weybridge Road. The address was then changed to 37 Weybridge Lane.

Wills had been entering his houses in architectural competitions since the mid-1920s, seeing in them an opportunity, win or lose, to promote his name and his work. In 1929, he had won a regional first place award in the annual Better Homes in America small house competition. In 1932, he entered the Dunlavy house in the same competition and was awarded the Gold Medal for the best small house in the country. 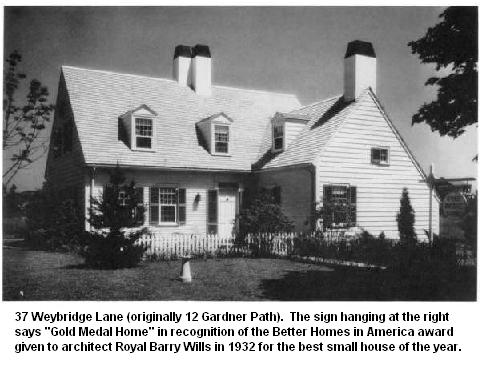 "The first prize plan by Mr. Wills," said the award committee (as reported in February 26, 1933 edition of the New York Times)

shows great charm, expresses the spirit of the locality in which it is built, has a fine scale and composition and shows good use of materials. It has an air of domesticity and shows great care in the manner in which all detail has been brought together. There is a good, frank use of chimneys and a fine handling of the entrance terrace.

This one-and-a-half story plan is compact and well arranged. There is a fine relation of rooms combined with economic and efficient circulation. The library is arranged with real privacy. The second floor hall occupies the minimum amount of space and yet this small home has ample-sized rooms. 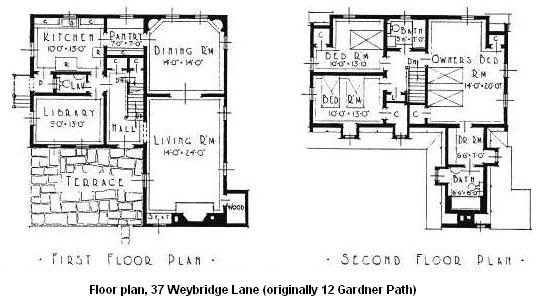 Wills received his award at the White House from President Herbert Hoover, honorary chairman of Better Homes in America. Hoover, as Secretary of Commerce under Presidents Harding and Coolidge, had been a major supporter of the organization in its early years and was the primary force behind its reorganization and continued prominence through the late 1920s and into the 1930s.

The next residents were Ethel M. and H. WIlliam Ittman (or Ittmann) who may have acquired the means to purchase this house through an unusual windfall. When Ethel Ittman's elderly and reclusive aunt, Alice Hayden, died in WIsconsin in July 1934, more than $200,000 was found hidden in her home in a bureau drawer and an old laundry bag. (Hayden's husband, who had died more than 30 years earlier, had been one of the most prominent attorneys in the state.) Hayden's will, according to a story in the Chicago Tribune, divided the money equally between Ethel Ittman (1884-1968, born in Wisconsin) and her son William Jr. (with the exception of $5,000 left to Hayden's sister, who was Ethel Ittman's mother.) The Ittmans were first listed at 37 Weybridge Lane the following year.

William Ittman was born Hans Wilhelm Itmann in Germany c1888 and came to the United States in 1914. He was an investment broker, although he was shown as retired beginning in 1939. The Ittman's son William (1916-1982) was listed with them at this address through 1939. William Ittman Sr. was listed through 1944, and members of the family continued to be listed at this house until the early 1950s.