33 Weybridge Lane, like all four of the houses on this small and still private street (and 21 others in Blake Park), was designed by Royal Barry Wills and built by Maurice A. Dunlavy.

The first residents of this house were Harry and Jessie Chase. Harry E. Chase (born c1869) was president of the Chase Express Company, founded by his father Charles in 1862. The firm, based in Brookline with several offices in Boston, delivered packages, financial documents, and other materials, serving businesses and others as a kind of predecessor of today's UPS, Federal Express, and the like. (American Express and Wells Fargo, among others, had their origins in this kind of express service.) 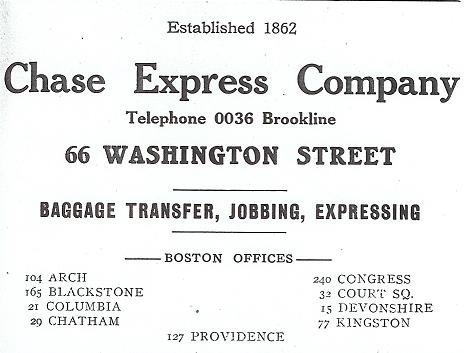 The Chase Express offices at 66 Washington Street -- part of the area where Brook House is today -- at one time included stables for several dozen horses and the wagons they pulled as part of the express business.

The Chase family was listed at this house from 1935 until the early 1950s.