Barnet Wolek, the builder of this house, was a Blake Park resident, living at 118 Gardner Road, which he also built, from about 1928 until his death in 1974. This is one of two houses in Blake Park designed by the architects Isenberg & Feer. (The other is 69 Stanton Road.)

The residents of 46 Blake Road were the family of Albert (1892-1959) & Kate (1899-1994) Ravreby. Albert was a salesman. The 1930 U.S. Census, which shows the family living in Boston, lists him as a commercial traveller dealing in wholesale candy. By the 1940s, he was a distributor of coin-operated machines including jukeboxes. He worked with his brothers Jack and Ed at the Owl Mint Machine Co. and later formed Associated Amusements with Ed. 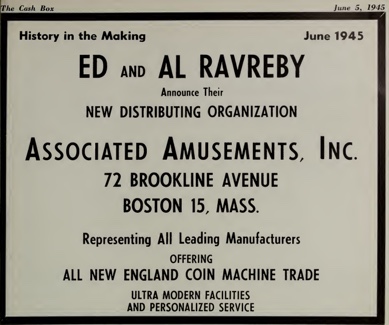 The Raverby's children included Mark, who was eight when the Blake Road house was built, and Marcia, three years younger. Also living with the Raverbys at this address was Kate's father Abraham Berenstein, a tailor. The family was listed in the Street List at this address until 1964.