The builder of this house, R.F. Jenkins, also built 54 and 64 Welland Road, as well as 9 Greenough Street.

Gordon Culham, who, with his wife Jessie, was the first resident of this house, was a landscape architect who had worked with Frederick Law Olmsted and his firm in Brookline. A Canadian who had come to Massachusetts to attend Harvard, Culham returned to Canada and was one of the founders of the Canadian Society of Landscape Architects & Town Planners in 1934. The Culhams were listed at this address in 1928 and 1929.

Lucy A. Bowker and her four children were next, listed here from 1930 to 1945. Lucy Bowker (born c1872) was the widow of Everett M. Bowker who, like several members on both sides of the family, was active in public service. 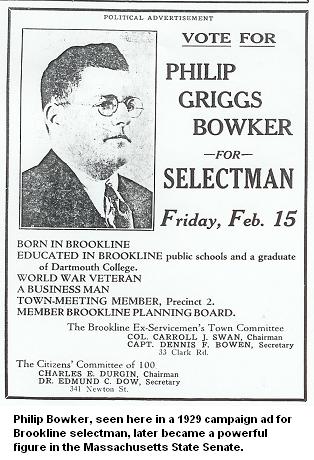 Lucy and Everett's oldest son, Philip G. Bowker (1899-1966), was first elected to office as a Brookline Town Meeting Member in 1927. An insurance broker, he continued to serve on Town Meeting until 1958. He was later elected as a Republican to four terms as a state representative (the first in 1932) and represented his district in the State Senate from 1946 to 1958. As Senator, Bowker was a leading opponent of Democratic Governor James Michael Curley and led a special Senate commission investigating communists in Massachusetts in the late 1940s and early 1950s.

Bowker's defeat by a Democratic newcomer in the 1958 election was an upset and part of the rising tide of the Democrats in Massachusetts legislative politics.

Everett Bowker Jr. (1901-1981) was also in politics, serving for 10 years in the Massachusetts House of Representatives. He worked in an investment house. Lucy Bowker's oldest daughter, Eleanor (born c1905), was a public school teacher. The youngest child, Helen (1912-1995), was listed as a clerk in 1944 and 1945. She had no occupation listed before that.

The Bowkers were followed at this address by Abraham Cooper, his daughters Etta Cooper and Celena Slotnick and Celena's husband Isadore Slotnick. They had lived previously at 49 Summit Avenue. Abraham Cooper was retired. He had run a copper manufacturing business. Born in Russia, he came to the U.S. in 1903. Etta Cooper (1908-1987) was listed as a secretary in 1946. Isadore Slotkin (1908-1992) was a manager at a monument works in Brookline. He and Celena Slotnick (1909-2005) had two daughters.

The family continued to be listed at 48 Welland until the early 1960s.