This house was the first of three built along the Washington Street edge of the Blake estate during the development of Blake Park. (Two other Washington Street houses were added in the 1950s.) The house, raised above the level of the street, was set behind the stone wall that had marked the estate's boundary on this side since at least the 1890s.

The paired photos below show the site in 1916 (left) and in 2005. In the center of the older photo (taken from the P.H. Park Trust brochure) is the beginning of the main roadway of the Blake estate, leading in from Washington Street and winding its way up toward the Blake house. The same roadway, straightened out at its start, is Weybridge Road in the new photo.

The Washington Street wall can be seen flanking the entranceway in both photographs. 454 Washington Street is the house at the left behind the tall tree in the 2005 photo. Missing from the newer photo are the vine-covered structures marking the entrance to the estate in the 1916 photo. These are not bushes, but pieces of an ornamental stone and iron gateway. The gateway is seen in more detail in the two photos below.

The photo at left is a closer view of the gate from the same 1916 photo above. The right photo, taken in winter about 20 years earlier, shows the left-hand section of the gate, without the vines. An iron gate is just visible between the tall block at the end of the wall and the two ornamental posts to its right. The tall block is gone today, but the ornamental posts, whose shape can be more clearly seen here, were apparently saved and have been incorporated into the entrance to 454 Washington. The 2005 photo below shows the posts in their present location, flanking stone steps cut through the wall for the entrance to the house. 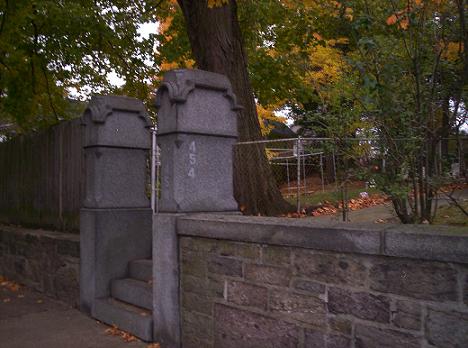 The first and longtime residents of 454 Washington Street were Thomas and Mildred (Prouse) Kendrick and their family. Thomas Paul Kendrick (1896-1970) was a physician whose parents had come to the U.S. from Northern Ireland. Kendrick was active in civic affairs. He was a member of the Brookline School Committee from 1928 until his death and was its chair from 1952 to 1961 and from 1968 to 1970. He also served on the town's Recreation Commission and was Norfolk County Medical Examiner in the 1950s.

Thomas and his wife Mildred (1901-1974) had a daughter and two sons. The 1930 U.S. Census showed the residents as: Thomas P. Kendrick, 33, physician; Mildred P. Kendrick, 22, born Vermont; Mildred Kendrick, 3; Thomas Kendrick, 2; and Francis Kendrick, 1. A member of the Kendrick family who is doing some genealogical work has indicated that the census is in error on the children's names: they were Janice Ann, Thomas P Jr., and John Roger Kendrick which is also how the names are listed in Thomas Kendrick Sr.'s obituary in the Brookline Citizen (4/2/1970).

The Kendricks owned this house until Mildred's death in 1974.